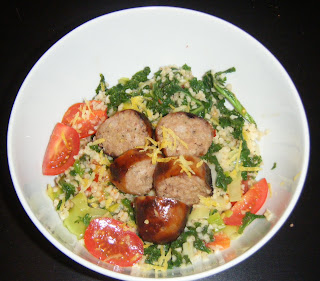 I've never tried curly kale. For some reason I've been a bit intimidated by the thought of cooking with it, as I don't really know how to use it. Anyway, curly kale is supposed to be very nice and also very nutrious, so when I was aimlessly wandering around in Waitrose trying to find something to cook for dinner, I thought that I should try something new and use kale. But what to eat and cook it with? I knew that you can steam and stir-fry kale, and that I had a lot of bulgur at home, so I decided on a warm salad with kale and spicy sausages. Spring has finally come to London, but it's still been freezing in the mornings so if I'm having a salad it has to be a warm one.

I'm very happy with my first attempt of using kale, turns out it's easy to use, with a nice taste, cheap, and apparently good for me, so I will defentely try it again.

Add bulgur and stock to a pot and cook on low heat for around 10 min until soft. If there is any water left, drain it and fluff the bulgur with a fork to separate the grains

Fry the sausages in a frying pan. For pork sausages like the ones I used, fry them whole and then slice them. If you use chorizo, you might want to slice them first and then fry to them to get them a bit crispier and release some of the fat.

Steam the kale lightly for 1-2 min. I think it's easiest to steam using the microwave. Just add kale, and a couple of tablespoons of hot water

Stir together the vegetables and bulgur with the lemon juice and zest.

Serve the kale and bulgur topped with the fried sausages.
Posted by The hungry Swede aka Saga at 21:57