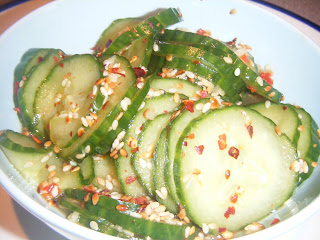 I spend way too much time daydreaming about traveling. I love to make plans and to have something to look forward to. This year I've been to Thailand, Italy, China, Sweden, and Denmark. I wish I could go somewhere new next year, maybe South Korea, Argentina or Peru? But I will be skint for the next 2 years because I'm starting on a part-time MBA program in September and ALL my money will go to paying the tuition fees (please everyone, fingers crossed that I get a scholarship!).

In the meantime, I'm lucky to live in a metropolitan city like London where you can eat yourself around the world. As I've written about before, I go out quite frequently for Korean food. To me, one of the best things eating at Korean restaurants is the banchan - side dishes served with the meal, often different types of kimchi, fermented cabbage and vegetables, and namul, seasoned vegetable/salad dishes. One common namul is a lightly pickled cucumber salad seasoned with sesame.

Similar dishes are served also in Sichuan (often with an addition of Sichuan pepper and red chili), Japan and Thailand (with fish sauce instead of soy, and an addition of birdseye chili and coriander). In Sweden we also do a cucumber dish with lightly pickled cucumber, pressgurka, with cucumber slices marinated in salt, sugar, and white or pickling vinegar (ättika), this is traditionally served with meat stews, meatballs or roast meat.

Below is my take on a Korean cucumber salad. This is a tweaked version of recipe I found at a gret Swedish food blog, Lilla matderiven. This is of course great with Korean dishes like bulgogi, but also with any bbq meat or fish. I've had it as a side dish with tuna sashimi and miso soup.

Toast the sesame seeds in a dry frying pan at high heat.

Combine all of the ingredients to the marinade.

Let marinate for at least 10 min before serving

Store in an airtight container in the fridge for up to five days
Posted by The hungry Swede aka Saga at 14:51