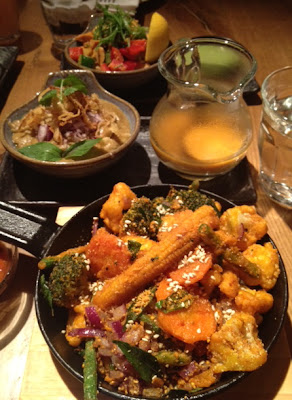 From front to back: Thoran, hyderbadi haleem, chicken chaat
A couple of weekends ago I went to Roti Chai, an Indian restaurant close to Marble arch, with my sister and brother in law. They are also fellow foodies, and whenever they come over to London I try to find interesting new places for us to eat. I had read a lot of good reviews of Roti Chai, and the restaurant more than delivered. The food was amazing, the service was good, and it was a nice venue with a lively atmosphere, I really recommend a visit!

The restaurant has a bar and seating area on the ground level for their street food inspired dishes, and below that a dining room with a more extensive menu. We went to the dining room, and realized we were quite lucky to manage to book a table that same very day, as the restaurant filled up quickly. On the menu they have small plates of street food inspired dishes, that you can either have as a starter or combine in the manner of tapas, main courses from different Indian regions, and a couple of desserts.

When we went there was on offer as part of the London restaurant fortnight, with a cocktail, starter, main and dessert for £25. We all choose to take the set menu, and as you could choose between four different starters and mains, we all took different ones so that we could share all of them between us. As I had read a lot of positive comments regarding their chicken 65, a common Indian street food dish with spicy chicken, we also ordered that. 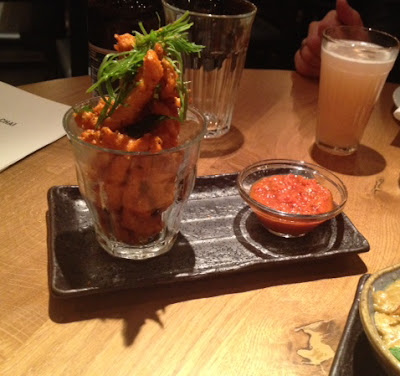 Chicken 65, coconut and guava bellini
We started with a coconut and guava bellini which was tasty with a light coconut flavour. The cocktail list was amazing, and I'll definitely will go back just to try more of their cocktails. The starters we ordered, in addition to the chicken 65, was chicken chaat, a tandoori style chicken dish, crispy thoran, a dish with stir fried curried vegetables, and hyderbadi haleem, a stew of pounded wheat and lamb. All dishes were divine! The Chicken 65 carried a serious punch of chili heat, the chicken chaat was light and with zesty citrus kick, the vegetables in the thoran were so light and crispy with a lovely curry flavour, and the hyderbadi haleem, a dish I never had before, had a light cardamon flavour and a creamy, almost cheesy texture. It was a great start to the meal! 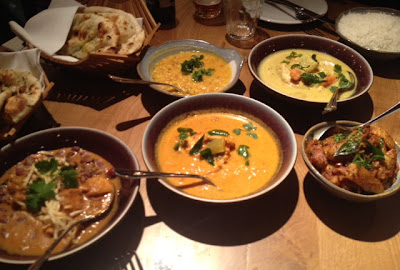 Front: Rajma chicken, chicken ishtu, spicy potatoe wedgesBack: Roti and naan, tarka dahl, Keralan fish kary
Next we had ordered three mains, Keralan fish kary, rajma chicken and chicken ishtu. These were served with steamed rice, roti, and we also ordered a garlic naan. In addition, we got two more dishes as compliments from the kitchen, spicy fried potato wedges, and possibly the best yellow lentil tarka dahl I have ever had. Seriously, I could just have had that tarka dahl and I would have been happy. The Keralan fish curry had a light coconut and curry flavour, very tasty. The rajma chicken was a stew of chicken and red kidney beans, flavoured with cardamon and cinnamon, delicious! Again something I haven't had before. The chicken ishtu was a chicken coconut stew, with a light flavour of ginger, curry and anise, also very good. I need to also mention the bread, the cumin flavoured roti and the garlic naan were all very very good, light and not greasy. 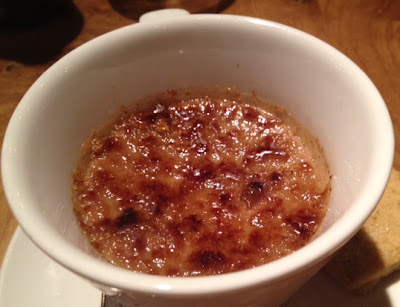 After all that, we were all groaning after eating far more food than we should. But how could we not? The food was so yummy! Somehow we still managed to find space for dessert though, a lovely silky chai flavoured creme brulee. It was a great finish to an amazing meal. I will definitely go back, for a full meal or just for a couple of cocktails and small plates of street food inspired dishes.
Posted by The hungry Swede aka Saga at 19:49

Email ThisBlogThis!Share to TwitterShare to FacebookShare to Pinterest
Labels: reviews