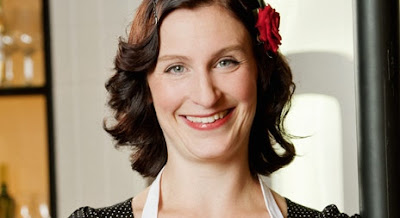 I am so incredibly happy and proud today, because one my best and oldest friends, Sigrid Barany, has today won Swedish Masterchef!!!!!! The Swedish Masterchef is similar to British and Australian Masterchef, with amateur cooks competing for the title. It's been fantastic, exhilarating, and nerve wracking seeing my friend on TV, but she's been AMAZING! I can't wait to get her cook book when it comes out in April.

Sigrid have also just started a blog (only in Swedish I'm afraid) that you can follow here: Spisvärme.

I have so many memories around food and Sigrid, many from when we used to share a flat together in Uppsala. Weird cooking session in the middle of night after drinking way too much (my favourite night meal is pasta with an obscene amount of cheese, ketchup and curry....), cooking up enormous amounts of food for our joint 25 year bday party (I think we ate leftover for months afterwards), and lavish dinners for new years eve celebrations.

Another food memory is our trip to Porto in Portugal, where Sigrid, who was very tired after a Ryanair flight, ordered a bbq hot dog in a small touristy restaurant for lunch. She got a large sausage that she had to bbq herself on the table over a live flame, the result was not only a cooked sausage but that Sigrid lost part of her fringe..... We had better luck with our food going out for dinner in Porto, we found a great place that did Portuguese tapas. It was so good that we had to come back a second time, and ended up staying very late at the restaurant and got free drinks from the lovely waiting staff.

Sigrid has made me so many fantastic meals, and I'm not surprised that she won today. Now I just hope she'll come and cook for me soon here in London :)
Posted by The hungry Swede aka Saga at 21:56