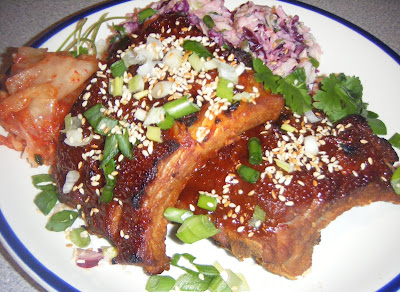 This weekend I have done nothing but cooking, walking in the sunshine (really felt like spring this weekend!), and streamed a lot of TV shows. Had a bit of catching up to do after holiday in Thailand (hot and sunny and white beaches and amazing food and quality time with my parents = great holiday). I'm quite addicted to shows like Vampire Diaries and Secret Circle. I know, I know, I am 36 years and watch teenage TV soaps about vampires and witches... What can I say, they're my guilty pleasures. I had brought my work laptop home, but, as usual, I haven't even taken it out of the bag yet. As it's now 8 pm, I'm guessing it will stay in the bag until tomorrow....

Anyhow, I love Korean food like bulgogi, bibimbap and kimchi, and luckily there are some nice, and cheap Korean restaurants in London, like the 3 or 4 restaurants on St Giles street and there is also a good one on Finchley road, Seoul. This weekend I decided to try to cook something Korean myself, and Korean spare ribs sounded like a good idea. I've actually never cooked spare ribs in my life, strange in a way because I love good sticky and tender ribs, and decided it was a good project for a weekend. I read a few recipes online, and from them made up my own.

First I had to go to Camden to get the spare ribs at Morrison's. Here in the UK I hardly ever see spare ribs at my usual Sainsbury's or Waitrose store, but Morrison's, another chain of grocery stores, often have good butcher and fish monger sections in their stores. I know, I should have gone to a proper butcher, but that felt like to much hassle. Easier to jump on the 274 to Camden... Coming back from Camden I went up to Finchley road, and went to an Asian supermarket, Natural natural, that's next to Waitrose. It's quite a small shop, and for anyone who wants a larger variety of Asian/Korean products, I would recommend going up to K-mart in Golders green instead. Anyhow, I got Asian pears, kimchi, and gochujang, a Korean hot red pepper paste, I needed and then went home to cook.

This recipe takes some time, but it is not labour intensive as most of the time is due to marinating or cooking the ribs. And believe me, it is so worth the time, because the ribs are amaaaaazing!!!! The ribs were so tender that the meat was almost falling of the bones, and covered with a sticky, hot and sweet glaze.

I served the ribs with kimchi and a coleslaw with lime and sweet chili, which was so good it really deserves a post of its own but is included here anyway. My mum makes a similar coleslaw, and it goes really well with any kind of barbecued meats.

Though how I ever thought that sticky ribs would be good as lunch box food I don't really know. Better bring some wet wipes with me to work tomorrow....

Toast the sesame seeds for the marinade and for serving in a dry pan. Ground half of the seeds to a coarse powder using a pestle and mortar

Mix all ingredients for the marinade together

Cover the ribs with the marinade, and leave in the fridge overnight. I think it's easiest to marinate the ribs in a large sealable plastic bag. Turn the ribs over a couple of times to make sure that all sides gets marinated properly.

Transfer the ribs with the marinade to a deep oven tray. Add the water and star anise and cover the tray with aluminium foil.

Combine all the ingredients for the coleslaw in a large bowl and let marinate in the fridge while the ribs cook.

Transfer the ribs to a plate, and pour the cooking liquid through a sieve and into a clean pot.

Reduce down the cooking liquid to a sticky consistency, then add 2 cm grated ginger

Put the ribs on the grid of an oven tray. Brush on a thick layer of the glaze.

Cook the ribs in the oven/grill for 5-10 min. Watch the ribs carefully to make sure they don't burn!

Sprinkle the ribs with toasted sesame seeds and spring onions, and serve with the coleslaw and kimchi.

Here's something for you to listen to while cooking, Fujiyama Mama by Wanda Jackson, queen of rockabilly.

Posted by The hungry Swede aka Saga at 19:43