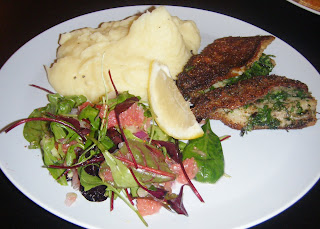 Fried herring (strömmingsflundror) with potato mash is one of my favourite traditional Swedish dishes. Herring is called strömming or sill in Swedish. The difference is that strömming is fished in the Baltic sea on the east coast of Sweden and sill on the west coast. In my mind strömming is also usually smaller than sill, don't know if that's actually true. If you have small herrings, when you fillet the fish you keep the two fillets connected and don't divide them along the backbone, this is what makes it a strömmingsflundra.

Herring is eaten in many different forms in Sweden, fried, pickled, cured and fermented. I like some pickled herring at Christmas, Easter or midsummer, but otherwise my favourite is having it fried or fermented. The fermented one is not for everyone, when you open a can you can smell it a mile away. But eaten outdoors in August, with almond potatoes, crispbread, onions, and washed down with an ice-cold schnapps, it is a real treat.

Although herring is fished around the UK, I've never seen it in any of the usual supermarkets (except as roll mops or smoked), so on Saturday I went to Borough market. I love food markets, and although Borough market can get really crowded, at 10 in the morning it was fairly empty. One of the fish stands had herrings, albeit quite a bit larger than I would have liked. Once the main ingredient was sorted and I picked up some veg, bread, cheese, and beautiful pink forced rhubarb for dessert, it was time to indulge by downing a couple of oysters and having a couple of fried scallops. Heavenly.

I served the herrings with potato mash (recipe not included, I'm sure you already know how to make a potato mash) and a fennel salad with ruby grapefruit. As the herrings are quite a rich fish (and even more so with buttery mash and a little clarified butter at serving), I like something with a bit of acidity and bite to complement it.

Get your fishmonger to fillet the fish unless you got a good sharp knife (I regrettably don't have a very good one anymore). If you have small herrings, it's not a problem that a lot of the small bones is still there when you eat it, but as I found out this time, if you have larger herrings you might want to try to remove more of the bones prior to cooking them or you'll spend the entire meal picking out the bones.

Dip the skin side of the herrings in breadcrumbs or oatmeal, and place on a tray. Sprinkle the meat side with salt and pepper.

Mix the finely chopped herbs with butter, and cover the meat side of half of the herrings. Add another herring fillet with the meat side down on top (like you're making a fish sandwich with the herb butter in the middle)

Fry the herrings on medium heat in butter or oil in a frying pan until golden on both sides and the fish is cooked.

Serve with potato mash, a little additional melted and clarified butter to pour over, lemon wedges and fennel salad

Add grapefruit, fennel, red onion and salad leaves to a bowl. Dress the salad.
Posted by The hungry Swede aka Saga at 20:03