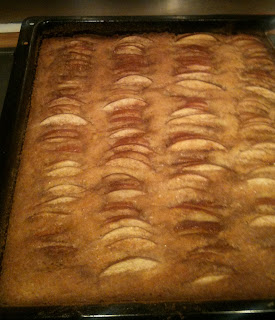 Where I work we have a cake club. Every Monday we take turns bringing in a homemade cake, and this is truly the highlight of that day (sometimes week I'm sad to say), and we had some glorious cakes so far. My memory is not fantastic, and I was convinced that it was my turn to bring a cake on the Tuesday after the August bank holiday, so I decided to do one of my favourite cakes. It turned out to actually not be my turn, but I don't think anyone really complained about getting cake on a Tuesday instead of a Monday.

My mum used to bake this quite often in particular during the autumn when the apples are at their best. The combination of cinnamon and apples are a classic, and this cake is so easy to make that I highly recommend it. I've taken the recipe from a classic Swedish cake recipe book, Sju sorters kakor (Seven types of cakes) from ICA bokförlag. The title refers not to that the book only contains recipes for seven types of cakes, but to the tradition that if you invited someone over for coffee in Sweden, you should serve them at least seven different types of cakes or biscuits. This would be called having kafferep in the olden days, and I guess is the Swedish version of cream tea. Having a proper break for coffee and maybe a cake or cinnamon bun, called fika in Sweden, is still very popular. Fika can be just a short break at work, or last for hours at a cafe or at home. One of the things I miss most about living abroad is meeting up for a fika.

Anyhow, here's the recipe for this lovely cake. I have no idea why it is called Fyris apple cake, maybe it refers to the Fyris stream flowing through my Swedish hometown, Uppsala?

Butter and bread (use bread crumbs, can be bought in some grocery stores, or polenta) a round tin form, 24 cm in diameter. Using bread crumbs or polenta makes it easier to remove the cake without it sticking to the tin.

Cream the butter and sugar until light and fluffy.

Add one egg at the time, and then the flour mixed with the baking powder. Stir in the milk to a smooth batter and pour into the form.

Slice the apples thinly and stick into the batter.

Mix the cinnamon and sugar and sprinkle over the cake.

Bake for 30-40 min in the lower region of the oven (if you have an electric oven, otherwise in the middle).

Enjoy as it is or with a good custard or vanilla ice cream.

If you want to make a larger one, just double or triple the recipe and use a large oven tin and cut into squares.
Posted by The hungry Swede aka Saga at 20:30