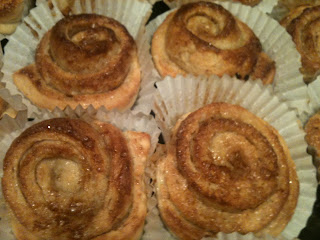 Cinnamon buns (kanelbullar) are probably one of the most popular baked goods in Sweden. You can buy them in every coffee shop and grocery store. Cinnamon buns even have their own day in Sweden, it can be celebrated on the 4th of October. Everyone loves cinnamon buns, and maybe no one more than Swedish expats. It's just something so comforting, so much like home to have a warm newly baked cinnamon bun and glass of cold milk. That they also taste divine is a bonus.

As I mentioned in my previous post, I brought a cake on the wrong day for the cake club at work. To remedy this, I decided to bake cinnamon buns and bring into work the following Monday. This was met with protests from my Swedish flatmate, she thought it was very unfair that I would bake cinnamon buns when she was away from London and couldn't have any. I had to promise her to leave a bag of buns in the freezer for her for when she would be back. Like I said, cinnamon buns brings out a lot of feelings.

This recipe is again from the fantastic Sju sorters kakor cake recipe book from ICA bokförlag.

Melt the butter and add the milk, warm to 37C (finger warm).

If using fresh yeast, dissolve the yeast in some of the warm milk, then add the remainder of the milk and butter, salt, sugar and cardamon. If you use dry yeast, mix it with the flour before mixing it with the milk, sugar etc.

Then add the flour, start with approx 2/3 of the flour (so mix the dried yeast with only 2/3 of the flour, or you might not add all of it...), and work the dough until smooth and not sticky. Add more flour if necessary.

Let the dough rise to double size in bowl covered with a tea towel (or use clingfilm, it works as well). This usually takes 30-60 min.

Work the dough in the bowl for a couple of minutes, and then move it to a work surface lightly sprinkled with flour.

Divide the dough into two pieces, and, using a rolling pin, roll out the dough to a large rectangle, roughly 0.5-1 cm thick. Cover the dough with a thin layer of butter, sprinkle with sugar, cinnamon and cardamon.

Start rolling together from one of the long edges until you got a long roll. Divide the roll into 1-1.5 cm thick slices. Place the slices with one of the cut surface facing upwards in paper forms (I use the ones for muffins/cupcakes) and place on a oven tray. Cover with a tea towel and let rise to double size. This again takes 30-60 min. Repeat with the other half of the dough.

Heat the oven to 225C (if using electric fan oven) or 250C (if using a conventional electric or gas oven).

Brush the cinnamon buns with egg wash, and sprinkle with sugar. In Sweden you would use a type of sugar with larger granules, pärlsocker (pearl sugar), but normal granulated sugar works as well.

Enjoy!
Posted by The hungry Swede aka Saga at 21:07