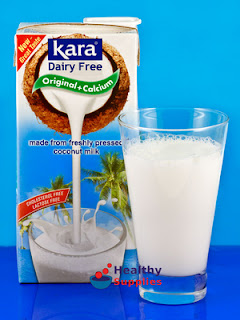 Before this vegan month I had really very little experience of non-dairy milk. To be honest, I'm not a big fan of milk, I would never drink a glass of milk on its own. I do however drink milk in coffee, which means that I actually consume quite a lot of milk as I can't function without a large cafe latte in the morning, and preferably another in the afternoon to keep me going. In addition to using milk in coffee, I use dairy products like milk, cream, creme fraiche and yoghurt in different recipes. And then there is cheese, mmmm, glorious cheese.......

Before I disappear into some kind of weird cheesy daydream, let's get back to milk. I'm not going to go into why milk and dairy production is a sensitive issue. Many people have written a lot about this, just google it if you want to know more (but if you enjoy milk, you'll likely to need a strong stomach to continue drinking it afterwards without considering at least briefly if there isn't an alternative way).

Anyhow, so what are the alternatives if you want to drink non-dairy milk? Turns out that there are much more alternatives than I knew! I thought it was just soy milk, but there are also almond milk, coconut milk, rice milk, hazelnut milk, oat milk, and even hemp milk. All of these different varieties were available at Sainsbury's, pretty impressive actually. Many of these have added calcium and vitamins to reach similar nutritional values as dairy milk. There are fresh non-dairy milks, but also a larger range of UHT non-dairy milk.

I decided to try a couple of different ones. As I don't have a sweet tooth, I only tested unsweetened versions, which removed quite a few options. I selected soy milk, almond milk, coconut milk, and hemp milk. See below for my comments:

Coconut milk - this is not the same as the coconut milk bought in cans for cooking! Or, it is the same but diluted and in different packaging. Anyhow, nice white colour with a slight coconut flavour, nice and creamy in coffee. Works well in cooking, in particular Asian flavoured dishes

Hemp milk - slightly bitter taste with greyish colour. The worst of the ones I tested.

My favourite so far for my morning coffee is definitely the coconut milk. I buy an organic coconut milk with added calcium and vitamins, and it's just delicious. A little addition of cinnamon and cardamon to the coffee, and that cold boring commute becomes a warmer and nicer experience. For cooking, I have good experiences with soy, almond and coconut, either one would work with most dishes.

Personally, I feel better without dairy products. Let's just say my stomach is happier and not go into more details than that. I actually think that even if I stop the vegan experiment in February, I will continue drinking non-dairy milk.

For more discussion on different non-dairy milk alternatives, read Replacing dairy milk by Oh she glows. She also has a recipe on how make your own oat milk. Though making my own milk feels like a step to far for me....

So what about other dairy products like yoghurt and cheese, and their non-dairy alternatives? I'll come to that in a later post, but it's a much more negative experience compared to non-dairy milk.

Posted by The hungry Swede aka Saga at 00:07